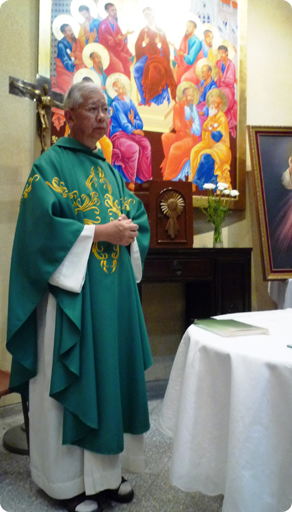 恭讀聖馬爾谷福音 7:31-37
耶穌從提洛境內出來，經過漆冬，向著加里肋亞海，到了十城區中心地帶。有人給他帶來一個又聾又啞的人，求他給他覆手。耶穌便領他離開群眾，走到一邊，把手指放進他的耳朵裏，並用唾沫，抹他的舌頭，然後望天嘆息，向他說：「厄法達！」就是說：「開了吧！」他的耳朵就立時開了，舌結也解了，說話也清楚了。耶穌遂囑咐他們不要告訴任何人；但他越囑咐他們，他們便越發宣傳；人都不勝驚奇說：「他所做的一切都好：使聾子聽見，叫啞巴說話。」
—基督的福音。
(5th Week in Ordinary Time – Friday)
A Reading from the Holy Gospel according to Mark 7:31-37
31 Then he returned from the region of Tyre, and went through Sidon to the Sea of Galilee, through the region of the Decap’olis. 32 And they brought to him a man who was deaf and had an impediment in his speech; and they besought him to lay his hand upon him. 33 And taking him aside from the multitude privately, he put his fingers into his ears, and he spat and touched his tongue; 34 and looking up to heaven, he sighed, and said to him, “Eph’phatha,” that is, “Be opened.” 35 And his ears were opened, his tongue was released, and he spoke plainly. 36 And he charged them to tell no one; but the more he charged them, the more zealously they proclaimed it. 37 And they were astonished beyond measure, saying, “He has done all things well; he even makes the deaf hear and the dumb speak.”
—The Gospel of the Lord.