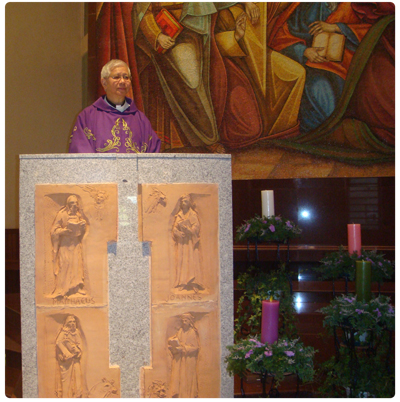 A Reading from the Holy Gospel according to Luke 1:57-66

57 Now the time came for Elizabeth to be delivered, and she gave birth to a son. 58 And her neighbors and kinsfolk heard that the Lord had shown great mercy to her, and they rejoiced with her. 59 And on the eighth day they came to circumcise the child; and they would have named him Zechari’ah after his father, 60 but his mother said, “Not so; he shall be called John.” 61 And they said to her, “None of your kindred is called by this name.” 62 And they made signs to his father, inquiring what he would have him called. 63 And he asked for a writing tablet, and wrote, “His name is John.” And they all marveled. 64 And immediately his mouth was opened and his tongue loosed, and he spoke, blessing God. 65 And fear came on all their neighbors. And all these things were talked about through all the hill country of Judea; 66 and all who heard them laid them up in their hearts, saying, “What then will this child be?” For the hand of the Lord was with him.