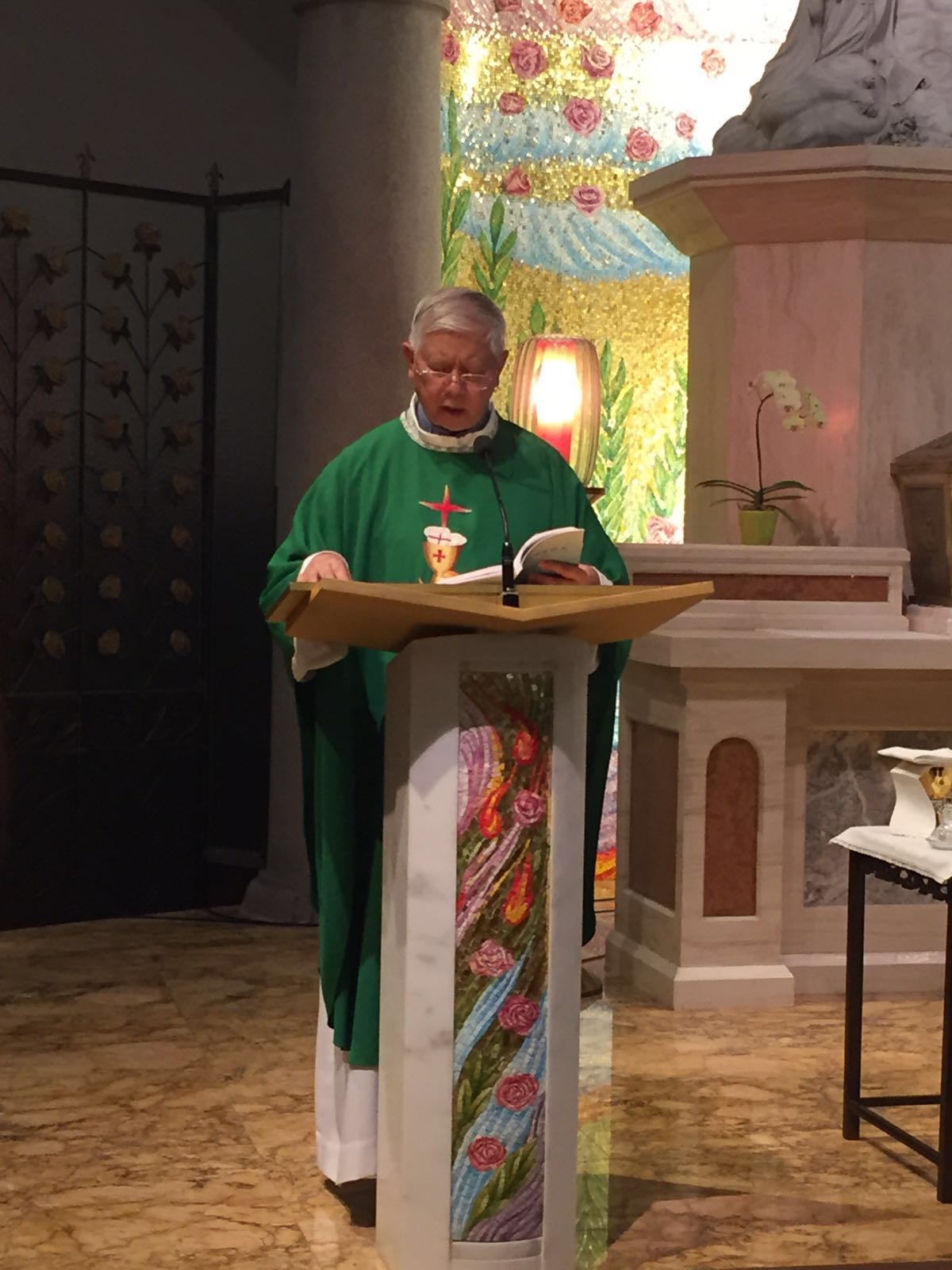 (The Most Holy Name of Mary)

A Reading from the Holy Gospel according to Luke 1:39-47

39 In those days Mary arose and went with haste into the hill country, to a city of Judah, 40 and she entered the house of Zechari’ah and greeted Elizabeth. 41 And when Elizabeth heard the greeting of Mary, the babe leaped in her womb; and Elizabeth was filled with the Holy Spirit 42 and she exclaimed with a loud cry, “Blessed are you among women, and blessed is the fruit of your womb! 43 And why is this granted me, that the mother of my Lord should come to me? 44 For behold, when the voice of your greeting came to my ears, the babe in my womb leaped for joy. 45 And blessed is she who believed that there would be a fulfilment of what was spoken to her from the Lord.”46 And Mary said, “My soul magnifies the Lord, 47 and my spirit rejoices in God my Savior.” 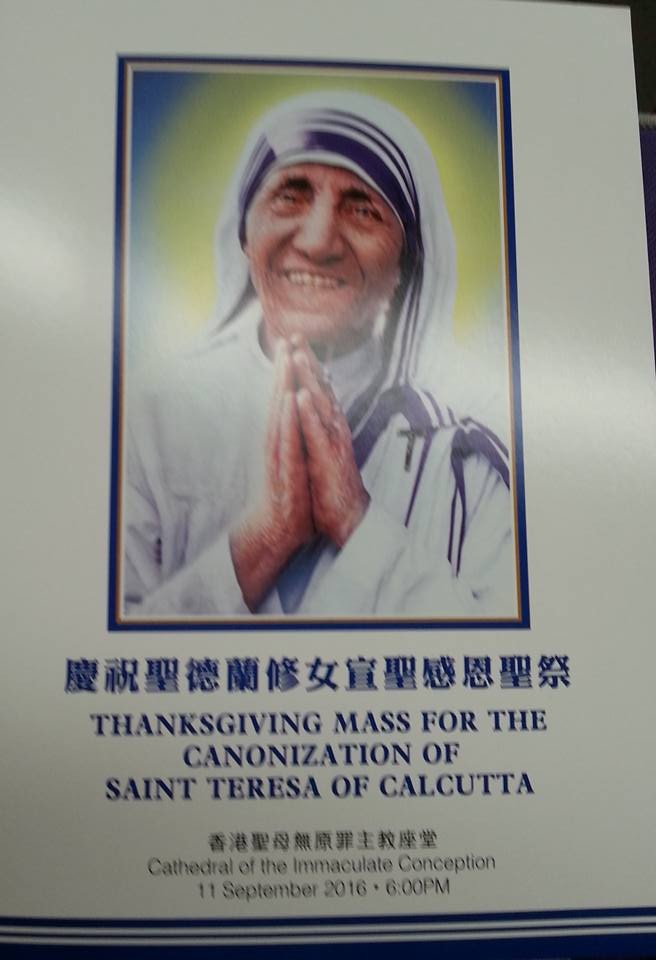 (Thanksgiving Mass for the Canonization of St. Teresa of Calcutta at Cathedral of the Immaculate Conception)

A Reading from the Holy Gospel according to John 19:28-30

28 After this Jesus, knowing that all was now finished, said (to fulfil the scripture), “I thirst.” 29 A bowl full of vinegar stood there; so they put a sponge full of the vinegar on hyssop and held it to his mouth. 30 When Jesus had received the vinegar, he said, “It is finished”; and he bowed his head and gave up his spirit.

A Reading from the Holy Gospel according to Luke 15:1-32

1 Now the tax collectors and sinners were all drawing near to hear him.2 And the Pharisees and the scribes murmured, saying, “This man receives sinners and eats with them.” 3 So he told them this parable: 4 “What man of you, having a hundred sheep, if he has lost one of them, does not leave the ninety-nine in the wilderness, and go after the one which is lost, until he finds it? 5 And when he has found it, he lays it on his shoulders, rejoicing. 6 And when he comes home, he calls together his friends and his neighbors, saying to them, `Rejoice with me, for I have found my sheep which was lost.’ 7 Just so, I tell you, there will be more joy in heaven over one sinner who repents than over ninety-nine righteous persons who need no repentance. 8 “Or what woman, having ten silver coins, if she loses one coin, does not light a lamp and sweep the house and seek diligently until she finds it? 9 And when she has found it, she calls together her friends and neighbors, saying, `Rejoice with me, for I have found the coin which I had lost.’ 10 Just so, I tell you, there is joy before the angels of God over one sinner who repents.”
11 And he said, “There was a man who had two sons; 12 and the younger of them said to his father, `Father, give me the share of property that falls to me.’ And he divided his living between them. 13 Not many days later, the younger son gathered all he had and took his journey into a far country, and there he squandered his property in loose living. 14 And when he had spent everything, a great famine arose in that country, and he began to be in want. 15 So he went and joined himself to one of the citizens of that country, who sent him into his fields to feed swine. 16 And he would gladly have fed on the pods that the swine ate; and no one gave him anything. 17 But when he came to himself he said, `How many of my father’s hired servants have bread enough and to spare, but I perish here with hunger! 18 I will arise and go to my father, and I will say to him, “Father, I have sinned against heaven and before you; 19 I am no longer worthy to be called your son; treat me as one of your hired servants.”‘ 20 And he arose and came to his father. But while he was yet at a distance, his father saw him and had compassion, and ran and embraced him and kissed him. 21 And the son said to him, `Father, I have sinned against heaven and before you; I am no longer worthy to be called your son.’ 22 But the father said to his servants, `Bring quickly the best robe, and put it on him; and put a ring on his hand, and shoes on his feet; 23 and bring the fatted calf and kill it, and let us eat and make merry; 24 for this my son was dead, and is alive again; he was lost, and is found.’ And they began to make merry.
25 “Now his elder son was in the field; and as he came and drew near to the house, he heard music and dancing. 26 And he called one of the servants and asked what this meant. 27 And he said to him, `Your brother has come, and your father has killed the fatted calf, because he has received him safe and sound.’ 28 But he was angry and refused to go in. His father came out and entreated him, 29 but he answered his father, `Lo, these many years I have served you, and I never disobeyed your command; yet you never gave me a kid, that I might make merry with my friends. 30 But when this son of yours came, who has devoured your living with harlots, you killed for him the fatted calf!’ 31 And he said to him, `Son, you are always with me, and all that is mine is yours. 32 It was fitting to make merry and be glad, for this your brother was dead, and is alive; he was lost, and is found.'”