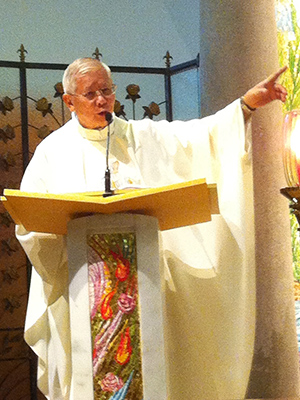 1 Now on the first day of the week Mary Magdalene came to the tomb early, while it was still dark, and saw that the stone had been taken away from the tomb. 2 So she ran, and went to Simon Peter and the other disciple, the one whom Jesus loved, and said to them, “They have taken the Lord out of the tomb, and we do not know where they have laid him.”
11 But Mary stood weeping outside the tomb, and as she wept she stooped to look into the tomb; 12 and she saw two angels in white, sitting where the body of Jesus had lain, one at the head and one at the feet. 13 They said to her, “Woman, why are you weeping?” She said to them, “Because they have taken away my Lord, and I do not know where they have laid him.” 14 Saying this, she turned round and saw Jesus standing, but she did not know that it was Jesus. 15 Jesus said to her, “Woman, why are you weeping? Whom do you seek?” Supposing him to be the gardener, she said to him, “Sir, if you have carried him away, tell me where you have laid him, and I will take him away.” 16 Jesus said to her, “Mary.” She turned and said to him in Hebrew, “Rabboni!” (which means Teacher). 17 Jesus said to her, “Do not hold me, for I have not yet ascended to the Father; but go to my brethren and say to them, I am ascending to my Father and your Father, to my God and your God.” 18 Mary Magdalene went and said to the disciples, “I have seen the Lord”; and she told them that he had said these things to her.

A Reading from the Holy Gospel according to John 11:17-27

17 Now when Jesus came, he found that Laz’arus had already been in the tomb four days. 18 Bethany was near Jerusalem, about two miles off, 19 and many of the Jews had come to Martha and Mary to console them concerning their brother. 20 When Martha heard that Jesus was coming, she went and met him, while Mary sat in the house. 21 Martha said to Jesus, “Lord, if you had been here, my brother would not have died. 22 And even now I know that whatever you ask from God, God will give you.” 23 Jesus said to her, “Your brother will rise again.” 24 Martha said to him, “I know that he will rise again in the resurrection at the last day.” 25 Jesus said to her, “I am the resurrection and the life; he who believes in me, though he die, yet shall he live, 26 and whoever lives and believes in me shall never die. Do you believe this?” 27 She said to him, “Yes, Lord; I believe that you are the Christ, the Son of God, he who is coming into the world.”