“Amen, I say to you, if you have faith the size of a mustard seed, you will say to this mountain, ‘Move from here to there,’ and it will move. Nothing will be impossible for you” (Mt 17:20)

The Word of Life, taken from Scripture, is offered each month as a guide and inspiration for daily living. From the Focolare’s beginnings, Chiara Lubich wrote her commentaries on each Word of Life, and after her death in March 2008, her early writings are now being featured once again. This commentary, addressed to a primarily Christian audience, was originally published in September 1979.

How often in the course of your life have you felt the need for somebody to give you a hand and at the same time realized that no one could solve your problem. Then, inadvertently, you turn to Someone who can make the impossible happen. This Someone has a name: Jesus.
Listen to what he says to you:

“Amen, I say to you, if you have faith the size of a mustard seed, you will say to this mountain, ‘Move from here to there,’ and it will move. Nothing will be impossible for you.”

Obviously, the expression “to move mountains” is not to be taken literally. Jesus did not promise his disciples the power to do spectacular miracles simply to amaze the crowds. In fact if you look through the whole history of the Church, you will not find one saint, as far as I know, who literally moved mountains by faith. The expression “to move mountains” is hyperbole, that is, a rhetorical exaggeration. It was intended to instill in the minds of the disciples the idea that with faith nothing is impossible.
Indeed, the purpose of every miracle of Jesus, directly or through his followers, has always been for the sake of the kingdom of God, promoting the Gospel or the salvation of humankind. Moving mountains wouldn’t serve this purpose.
The comparison with the “mustard seed” is used to show that what Jesus requires of you is not faith of a particular size, but a genuine faith. The characteristic of genuine faith is that it is rooted solely in God and not in your own strength.
If you are assailed by doubts or reservations about your faith, it means your trust in God is not yet total: your faith is weak and not very effective, and still depends on your own strength and on human ways of reasoning.
On the other hand, one who trusts in God completely lets God himself act and … for God nothing is impossible.
The faith Jesus wants from his disciples is, in fact, that attitude of total trust which allows God himself to manifest his power.
And this faith, which can therefore move mountains, is not reserved for certain exceptional people. It is possible, and it is a requirement, for all believers.

“Amen, I say to you, if you have faith the size of a mustard seed, you will say to this mountain, ‘Move from here to there,’ and it will move. Nothing will be impossible for you.”

It is thought that Jesus said these words to his disciples when he was about to send them out on a mission.
It is easy to be discouraged and afraid when you know you are a little flock, with no special talents, facing crowds of people to whom you have to give the truth of the Gospel. It is easy to lose heart in front of people interested in anything but the kingdom of God. It seems an impossible task.
It is then that Jesus assures his disciples that by faith they will “move mountains” of indifference and apathy in the world. If they have faith, nothing will be impossible for them.
This expression can be applied, furthermore, to all circumstances in life, as long as they are about the progress of the Gospel and the salvation of people.
At times, when faced with difficulties we cannot overcome, we may even be tempted not to turn to God. Human reasoning tells us, “Give up; it’s no use anyway.” It is then that Jesus urges us not to be discouraged but to turn to God with trust. In one way or another, he will answer us.
Some months had passed since the day when, full of hope, Lella first reported to her new job in the Flemish-speaking area of Belgium. But then a sense of dismay and loneliness took hold of her.
It seemed as though an insurmountable barrier had gone up between her and the other young women she lived and worked with. She felt lonely and like a stranger among people she only wished to serve with love.
It was all because she had to speak a language that was neither hers nor the language of those she spoke to. She had been told that everybody spoke French in Belgium, and she had learned it. But meeting the people, she realized that the Flemish only studied French in school and generally spoke it unwillingly.
Many times she tried to move this mountain of segregation that kept her apart from the others, but in vain. What could she do for them?

One evening she noticed that Godeliève was very sad. She had gone up to her room without touching her supper. Lella tried to follow, but she stopped in front of her door, shy and hesitant. She wanted to knock… but what words could she use to make herself understood? She stood there a few seconds, then gave up and left.
The next morning she went to church and sat at the very back, her face in her hands so that no one would see her tears. It was the only place where there was no need to speak a different language, where no explanations were needed, because there was Someone who understood beyond words. This certainty of being understood gave her courage, and with her soul in anguish, she asked Jesus, “Why can’t I share the crosses of the other girls and tell them what you yourself made me understand when I found you: that every suffering is love?”
She remained in front of the tabernacle as though expecting an answer from the One who had brought light into every darkness of her life.
Then her eyes fell on the Gospel of the day, and she read, “Take courage [that is, have faith], I have conquered the world” (Jn 16:33). These words were like a healing balm on Lella’s soul, and she felt great peace.
When she went back for breakfast, she met Annj, the girl who took care of the housework. She greeted Annj and followed her into the storeroom; then, without a word she started to help her prepare breakfast.
The first to come down was Godeliève. She came to the kitchen for her coffee quickly, to avoid seeing anyone. But there, she stopped; Lella’s peace had touched her soul in a way that was stronger than any words.
That evening, on the way home, Godeliève caught up with Lella on her bicycle and, trying to speak in a way Lella would understand, she whispered: “Your words aren’t necessary. Today your life said, ‘You too should love.’” The mountain had moved! 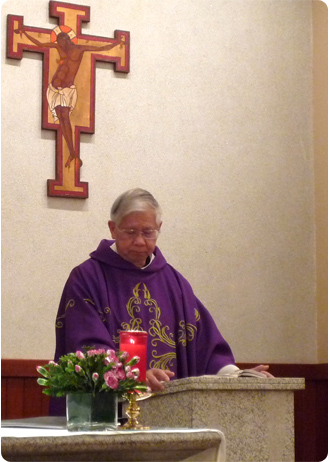