22 He said to (his) disciples, “Therefore I tell you, do not worry about your life and what you will eat, or about your body and what you will wear. 23 For life is more than food and the body more than clothing. 24 Notice the ravens: they do not sow or reap; they have neither storehouse nor barn, yet God feeds them. How much more important are you than birds! 25 Can any of you by worrying add a moment to your lifespan? 26 If even the smallest things are beyond your control, why are you anxious about the rest? 27 Notice how the flowers grow. They do not toil or spin. But I tell you, not even Solomon in all his splendor was dressed like one of them. 28 If God so clothes the grass in the field that grows today and is thrown into the oven tomorrow, will he not much more provide for you, O you of little faith? 29 As for you, do not seek what you are to eat and what you are to drink, and do not worry anymore. 30 All the nations of the world seek for these things, and your Father knows that you need them. 31 Instead, seek his kingdom, and these other things will be given you besides. 32 Do not be afraid any longer, little flock, for your Father is pleased to give you the kingdom.

February 12, 2010
Dear Children of Medjugorje, praised be Jesus and Mary!
1 – On February 2, 2010, Mirjana received her monthly apparition in Naples (Italy), and over 15,000 people gathered for the event. They came from all four corners of the area, believers as well as unbelievers. Although they gathered as early as 6am to 10am, a deep calm reigned, which is unusual for the people of Naples!! During the apparition, a perfect silence was kept and many experienced an overwhelming grace, almost tangible. The Cardinal of Naples, Mgr. Slawomir Oder, was informed of the event to take place. After the apparition, Mirjana transmitted the following message:

“Dear children! With motherly love, today I call you to be a lighthouse to all souls who wander in the darkness of ignorance of God’s love. That you may shine all the brighter and draw all the more souls, do not permit the untruths which come out of your mouth to silence your conscience. Be perfect. I am leading you with my motherly hand – a hand of love. Thank you!”

2 – How wonderful that Angels exist! The tragedy in Haiti left us all broken. A feeling of powerlessness took hold of us as we faced the magnitude of the needs and the depth of the suffering – actually the torture – lived by those people. But, no, we are not powerless to help! In addition to the act of supporting the good work being done there (see PS2), we have a marvelous means which we don’t think about enough. To illustrate this resource, here is an occurrence that my brother Pascal (a deacon) related to me:

Here is the story of a Russian writer, Alexander Ogorodnikov, taken from his own words. Before his conversion, he had delved into all the nihilist, destructive philosophies of the 20th century. He was a professor of philosophy and had one great passion: breaking into apartments at night with his buddies! He experienced a conversion in the 70’s at the same time as another intellectual, Tatiana Goritcheva.

He then founded a “seminary” in Moscow. By seminary we mean a sort of community of intellectual believers who prayed together, reflected on the faith, searched . . . in an obviously clandestine (hidden) way. Not that clandestine, however, since he was arrested several times, ultimately given the alternative: exile or prison. Alexander refused exile and was therefore incarcerated. For a period of ten years, he experienced many types of incarceration: political, of common law criminals, or others, but the worst for him was when, in the end, he was thrown into a freezing cell (the walls were covered with ice), completely nude, and in total, agonizing solitude. The worst of tortures!

He knew he was dying. I don’t know how he was able to smuggle a letter to his mother, in which he described the conditions of his detention, his agony, the psychological torture, etc. He begged his mother to get this letter to the West. The letter was published in Germany and in France in the spring of 1986. Thousands of petitions were gathered, and Alexander was freed. When my brother discovered this letter in France, he cried over it and decided along with his fiancé to offer all their sufferings and their prayers for him. But, in addition, they decided to send their Guardian Angels into his cell to comfort him and to help him survive.

After his liberation in 1986, Alexander was able to make a pilgrimage to Lisieux (France) in 1987 with Sr. Tamara, who had organized a busload of 50 Russians citizens for the purpose of learning about the Little Flower and praying to her. During a meal, my brother Pascal who was there that week-end, found himself in front of a man with a tiny beard; they introduced themselves. It was Alexander Ogorodnikov!! There is no way to describe the emotion they both felt when Pascal told him how he had sent him his Angel each day, exhorting others to do the same. It was then that Alexander confided to him that, in that horrible freezer where they had put him to let him die, he had been visited by the Angels of the Christians of the West who were praying for him. He felt the warmth of the angels who surrounded him like a cloak, and he sensed that it was connected to the prayer of these Westerners. He owed his survival both to the Angels and to the warmth of the prayers which came to comfort him in his solitude.

This fervent orthodox man, who still lives in Moscow, had numerous mystical experiences when he was in prison, cut off from everything. He almost came to regret his re-found liberty, which made him lose this proximity to the Divine.

In Haiti, those many victims who cry out in their pain, need your Angels today, all our Angels. We will never regret sending them to the Haitians every day, especially when we see in Heaven all the good they were able to do on these special missions ! (See PS3)

3 – The Procurator of the cause of Beatification of Pope John Paul II, Mgr. Slawomir Oder, has confirmed that “JPII wanted to go to Medjugorje in order to go to confession.” To other witnesses, the Pope said also that he wanted to go there in order to hear confessions and be at the service of the pilgrims. In preparation of his beatification, all of these statements will be officially published (See PS5). John Paul II is already declared Venerable.  Click on the picture below for the official website of the Cause for the Beatification and Canonization of John Paul II.

4 – Year of Priesthood: Here is a new prayer for priests that we may recite for a month:

We pray that the Blessed Mother wrap Her mantle around Her priests and through Her intercession strengthen them for their ministry. We pray that Mary will guide your priests to follow Her own words, “Do whatever he tells you”. May your priests have the heart of St. Joseph, Mary’s most chaste spouse.  May the Blessed Mother’s own pierced heart inspire them to embrace all who suffer at the foot of the cross. May your priests be holy, filled with the fire of your love, seeking nothing but your greater glory and the salvation of souls. Amen!”

(From Secretariat of Clergy, Consecrated life and Vocations. Year for Priests. USA)

We want to accompany and console Jesus in His work of Redemption! 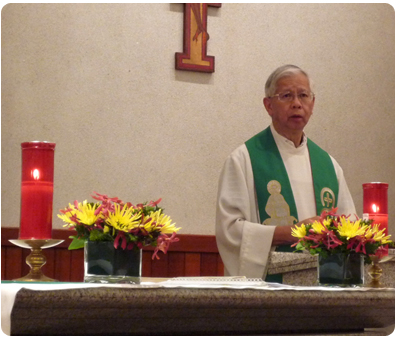 聖藍月旺司鐸殉道
恭讀聖馬爾谷福音 8:1-10
在那些日子，有一大群人，沒有什麼吃的了。耶穌叫過門徒來，給他們說：「我很憐憫這批群眾，因為他們同我在一起已經三天，也沒有什麼可吃的了。我若遣散他們空著肚子各自回家，他們必要在路上暈倒；況且他們中還有些是從遠處來的。」門徒回答說：「在這荒野裏，人從那裏能得餅，使這些人吃飽呢？」耶穌問他們說：「你們有多少餅？」他們說：「七個。」耶穌就吩咐群眾坐在地上，拿起那七個餅來，祝謝了，擘開，遞給他的門徒，叫他們分開；他們就給給群眾分開。又有幾條小魚，耶穌祝福後，也吩咐把這些小魚分開。人都吃飽了，把剩下來的碎塊收集了七籃子。人數約有四千；然後耶穌遣散了他們，即刻同門徒上船，來到了達瑪奴達境內。
—基督的福音。
(5th Week in Ordinary Time – Saturday)
A Reading from the Holy Gospel according to Mark 8:1-10
1 In those days, when again a great crowd had gathered, and they had nothing to eat, he called his disciples to him, and said to them, 2 “I have compassion on the crowd, because they have been with me now three days, and have nothing to eat; 3 and if I send them away hungry to their homes, they will faint on the way; and some of them have come a long way.” 4 And his disciples answered him, “How can one feed these men with bread here in the desert?” 5 And he asked them, “How many loaves have you?” They said, “Seven.”6 And he commanded the crowd to sit down on the ground; and he took the seven loaves, and having given thanks he broke them and gave them to his disciples to set before the people; and they set them before the crowd. 7 And they had a few small fish; and having blessed them, he commanded that these also should be set before them. 8 And they ate, and were satisfied; and they took up the broken pieces left over, seven baskets full. 9 And there were about four thousand people.10 And he sent them away; and immediately he got into the boat with his disciples, and went to the district of Dalmanu’tha.
—The Gospel of the Lord.