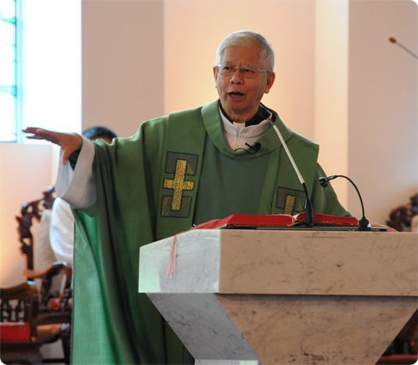 A Reading from the Holy Gospel according to Luke 6:6-11

6 On another Sabbath, when he entered the synagogue and taught, a man was there whose right hand was withered. 7 And the scribes and the Pharisees watched him, to see whether he would heal on the Sabbath, so that they might find an accusation against him. 8 But he knew their thoughts, and he said to the man who had the withered hand, “Come and stand here.” And he rose and stood there. 9 And Jesus said to them, “I ask you, is it lawful on the Sabbath to do good or to do harm, to save life or to destroy it?” 10 And he looked around on them all, and said to him, “Stretch out your hand.” And he did so, and his hand was restored. 11 But they were filled with fury and discussed with one another what they might do to Jesus.

Jesus addressed these words to Peter, who, after listening to the marvelous things Jesus was saying, put this question to him: “Lord, if my brother sins against me, how often must I forgive him? As many as seven times?” Jesus replied: “Not seven times, but seventy-seven times.”
Most likely, Peter had been deeply struck by the Lord’s preaching and, being a good and generous person, he had decided to throw himself into the new course of action that Jesus was advocating. He was ready to do something he considered quite exceptional for him, to forgive “as many as seven times.” Judaism, in fact, accepted the idea of forgiving two, three, at the most four times.
But by responding, “seventy-seven times,” Jesus is saying that the kind of forgiveness he wants has no limits. We must forgive always.

This phrase calls to mind the biblical song of Lamech, a descendent of Adam: “If Cain is avenged sevenfold, then Lamech seventy-sevenfold” (Gen 4:24). Thus hatred began to spread among the people of the world, swelling like a river at flood time into an ever-growing sea of hate.
Against this spreading of evil, Jesus proposes an unlimited and unconditional forgiveness that is capable of breaking the cycle of violence.
Only forgiveness can stem this tide of ill will and offer the human race a future that promises something other than self-destruction.

We need to forgive, to forgive always. Forgiving is not the same as forgetting, which often indicates a reluctance to face the situation. Nor is forgiveness a sign of weakness; it does not mean ignoring a wrong that we might have suffered out of fear of the stronger person who committed it. Forgiveness does not consist in calling what is serious, trivial, or what is evil, good. Forgiveness is not indifference. Forgiveness is a conscious act of the will, and therefore a free act.
It means accepting our neighbors as they are, notwithstanding the wrong done to us, just as God accepts us sinners, notwithstanding our faults. Forgiveness is not passive, that is, not returning one offense for another, but puts into action what St. Paul urges us to do: “Do not be conquered by evil, but conquer evil with good” (Rom 12:21).
Forgiveness consists in offering the one who has wronged you the opportunity to have a new relationship with you. It makes it possible for both of you to start life over again, and to experience a future in which evil will not have the last word.

How shall we live these words.
Peter had asked Jesus: “How often must I forgive my brother?” Peter speaks of “my brother.” When answering him, then, Jesus had in mind above all the relationships among Christians, among members of the same community.
Therefore, we must act in this way first of all toward those who share our faith in our family, at work, at school, and so on.
We know that someone who is offended by some word or action is often tempted to respond with a similar word or action. And we know that even persons who live in the same house often fail in loving because of differences in personality, because they are irritable, or for some other reason. We must, therefore, never forget that we can maintain peace and unity only by constantly renewing our attitude of forgiveness.
We will always be tempted to think of the others’ imperfections, to remember their past, to wish that they were different. But we need to acquire the habit of looking at them with new eyes, and seeing them as new persons, always accepting them immediately and without reservation, even if they do not repent.
You might say, “But that’s hard!” And you are right. This is the challenge posed by Christianity. We are, after all, following a God who, as he was dying on the cross, asked his Father to forgive those who had caused his death. And he was raised from the dead.
Let’s take courage. Let’s begin to live like this. We will find a peace we have never before experienced, and a joy we have never known.

The Word of Life, taken from Scripture, is offered each month as a guide and inspiration for daily living. From the Focolare’s beginnings, Chiara Lubich wrote her commentaries on each Word of Life, and after her death in March 2008, her early writings are now being featured once again. This commentary, addressed to a primarily Christian audience, was originally published in September 1999.

This commentary on the Word of Life is translated into 96 different languages and dialects and reaches several million people worldwide through print, radio, TV and the Internet. On page 24 you will find experiences some of our readers shared in their efforts to live a previous month’s Word of Life.

September 2, 2010 Message to Mirjana
“Dear children, I am beside you because I desire to help you to overcome trials, which this time of purification puts before you. My children, one of those is not to forgive and not to ask for forgiveness. Every sin offends Love and distances you from it – and Love is my Son. Therefore, my children, if you desire to walk with me towards the peace of God’s love, you must learn to forgive and to ask for forgiveness. Thank you.” (Mirjana 09/02/2010)
可愛的孩子們：
我在你們的身邊，好能幫助你們克服誘惑，因為這是你們潔淨自己的時刻。假若你們不寬恕別人的話，也很難期望得到寬恕。
每一罪過都是相反愛德，與愛德背道而馳。我的聖子便是愛的本身。
孩子們，假若你們要和我一起走這和平之路，便要寬恕別人，並且祈求天主的寬恕。
感謝你們。
聖母於2010年9月2日給Mirjana的訊息
梁達材神父躬譯